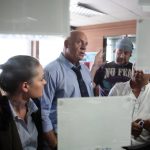 Filmmaker and author Paul Knight has been showcasing his creative side since 2007; he has produced, written and directed an eclectic array of books, features, short films, music videos and theatre that have earned him a following in both the literacy and entertainment industry.

Paul started out as a hobbyist in writing, his first novel ‘Coding of a concrete animal’ won the Gossip Girls crime writer award for 2007 and he has been featured in a number of True Crime collaboration books including ‘Bouncers and Bodyguards’, ‘Respect and Reputation’ and ‘The Guv’nor: Revealed’. He has also written biographies including ‘A cut above the rest’, ‘Wanted: my life on the run’ and ‘Concrete Roots’.

Not entering the film industry until he was in his 40’s, Paul undertook the 2-day film school class taught by Hollywood legend

In 2015, Paul was the subject matter of the documentary ‘Chancers’ by the award-winning documentary filmmaker, Ben Lewis for BBC Storyville and Oscar winning production company ‘Rise Films’.

In 2018, Paul completed the feature film, ’24 little Hours’ that was influenced by Robert Rodriguez’s filmmaking style in just 8 days and gained an International release in 2020.

2021 sees the European filmed actioner ‘Fyre Rises’ being made during the Covid-19 Lockdowns.